Originally published at Leeds.ac.uk on 01 February 2016

Allana Marsh: We speak with the University’s costume technician.

I talked to Allana at her desk in the School of Performance and Cultural Industries (PCI) surrounded by fabulous dresses, hats, shoes and mannequins. Feeling a little underdressed I found out that Allana’s early love of sewing and making costumes led  to a foundation degree in ‘Costume Construction for Stage and Screen’ from the University of South Wales, followed by a job touring with the Phantom of the Opera as a costume assistant. From there she went to college to study costume making and became a Costume Technician last year. 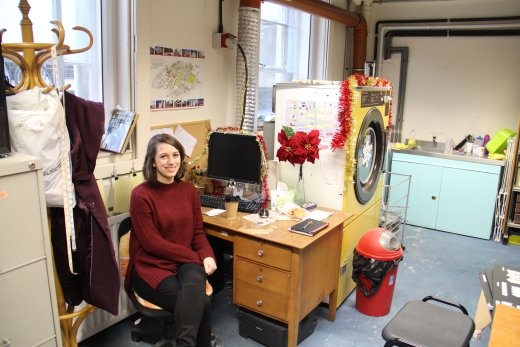 Her primary role is running the costume store for the PCI. “Most of the PCI students will need to use the store at some point for costumes. Whether it is just a very simple character or era, they usually like odd bits to put them in the right frame-of-mind.” Alternatively, she tells me, for the third year performance shows, she might have to dress 18 cast members in historically accurate costumes for a 1880s theatrical piece.

Allana describes how a student will come to her with an idea for a costume and she will try to guide the student in checking the historical accuracy of their ideas. She highlighted the difficulty of “knowing when you are trying to teach a student and when you are assisting as a technician.” She sees this as “the glue that holds technicians together. It is very easy to tell someone ‘do this, do that’ to help them as much as you can but stepping back is much harder.”

When I met Allana it was clear how she felt about her job, “I absolutely love it. I get to combine regular work, which is unusual as a seamstress, with making costumes in a fantastic atmosphere with the space and components available.” However, Allana was keen to point out that her job is not as glamorous as it sounds. Apart from running the stores which takes up most of her time, “I just do an awful lot of laundry and reminding students to bring cash for their deposits.” Costume repairs also take a lot of her time; even when exam performances roll around only about 50% of her time is spent making costumes. She makes up for the limited sewing opportunities by working as a freelance seamstress making costumes and bridal wear in her spare time.

She is still only in her first year at the University but has grand plans for to developing her role. She would like to be able to run day classes for the students so they can make their own costumes and also help with repairs during busy performance periods. She would also love to get involved with other Schools in the University. For example, she’d like to work with film and photography to do a photoshoot of her best costumes, in particular the Bretton Hall Collection of around 200 museum pieces which are rarely seen.

Allana can be found Monday and Wednesday in the costume store (Rm B09 of the Clothworkers’ South building). If you have a project that needs some costumes (strictly no fancy dress) she would love you to come and chat to her. Hire is around £10 per outfit plus a refundable deposit. Just remember to bring cash!