To be published in the Journal of the IST Spring 2017

Joseph Clement loved making things. Son of a hand-loom weaver, he took his passion for manufacturing to the highest level, becoming one of the most respected machinists and tool makers of the Industrial Revolution. So when computer pioneer Charles Babbage was looking for a technician to help him build his famous Difference Engine, Clement was the obvious choice. Unfortunately, a combination of status, class, and stubbornness meant the project was to end in acrimony and dispute.

Clement’s father was a weaver who loved working with his hands, even building his own lathe to make the bobbins his work required. Joseph followed in these footsteps, also building his own lathe, but, as was to become a pattern in his life, Clement was not satisfied with simple bobbins. He machined complex musical instruments and built his father a microscope to help him follow his passion for natural history, a passion that Clement shared and possibly sparked the development of the technical drawing skills for which he became famous.

Clement’s first employment was as a weaver, like his father, but the increased mechanisation of weaving meant there was not enough work to live on. This meant he had to become a thatcher in his home village of Great Ashby, Cumbria, but the work didn’t interest him for long. He left home, moving as far as Aberdeen and Glasgow to become a loom maker. True to form, Clement did not just make looms but also redesigned many of the tools of his trade. Eventually, in 1807, aged 28, he moved to London where he worked for various engineering firms, impressing with his rare combination of mechanical knowledge and drawing skills. He won prestigious awards from the Society for the Encouragement of Arts for his inventions and within four years his reputation (and savings) were such that he could open his own business in Lambeth offering machining services and first-class technical drawing.

In snobbish Georgian London, Clement’s strong Cumbrian accent did not easily endear him to potential clients, but he knew the quality of his work and seems to have been unintimidated by rich and illustrious customers. When Isambard Kingdom Brunel commissioned Clement make an improved train whistle, the result could be heard for miles around. However, when the bill came, Brunel was shocked as the price was six times that he had previously paid. Clement replied, “That may be, but mine are more than six times better. You ordered a first-rate article and you must be content to pay for it.” [1] Brunel had to pay up. Clement’s high prices meant that the new workshop’s income was initially modest, but the arrival of Babbage would change that forever.

Charles Babbage, mathematician and philosopher, was frustrated by inaccuracies in human-calculated mathematical tables, which were vital in navigational and astronomical work. Believing absolutely in mechanisation and mass production, his answer was to break these complex calculations down into simple addition calculations and automate them. Babbage was not shy about his reasoning: “It [mechanisation] affords against the inattention, idleness or the dishonesty of human agents.”[2]

Although mechanical calculators had existed since the 17th century, Babbage’s idea was to create something on a totally different scale. The Difference Engine would have been the first automatic calculator—the first machine to continuously use the results of the previous operation for the next one. This would constitute the first important step towards developing the first computer. However, to achieve this level of complexity required engineering skills way beyond those possessed by Babbage. More than that, it was at the limits of what was possible at the time.

Brunel’s father recommended Clement to Babbage as the only technician with the skills and tools capable of building the Difference Engine [3]. From 1823, Clement and Babbage worked together on the project. It rapidly became difficult to know where Babbage’s work ended and Clement’s began. Clement had to invent many new tools for the project – such was the complexity of the design, he even had to design and construct a new, bigger drawing table.

This was a major engineering project and as such very expensive. The determined Babbage managed to gain government support even getting the project nationalised. However, money was not the only problem. By 1832, after nine years’ work, they had only a simple working model that could achieve only very basic versions of the calculations required – it could only handle six digits rather than the 20 required. The model itself was one of the finest examples of precision engineering of the time and impressed many important visitors to Babbage’s home. However, it also highlighted the painfully slow progress of the project. Clement’s attention to detail and innovation was proving both a blessing and a curse.

It did not help that in 1828, Babbage’s father, two of his children, and his wife died. As part of his recovery his friends took him on a European tour for nearly two years. His absence was at a crucial time for the project as it was rapidly expanding from the initial design stages. On his return Babbage tried to regain control over the work, but his approach was undiplomatic and divisive. Eventually Babbage and his friends turned against Clement, claiming that he was mendacious, greedy, and was using time that was meant to be for the project on other work. Babbage eventually went to independent arbiters, who examined the project and found no fault by Clement. Finally, Babbage tried to wrestle from Clement the project, the drawings, and the tools he had developed. The belligerent Clement successfully resisted, but by this point relationships had soured to such an extent that there was only one outcome. Confusion over Clement’s status, technician or collaborator, destroyed their relationship and in 1833 they parted company. 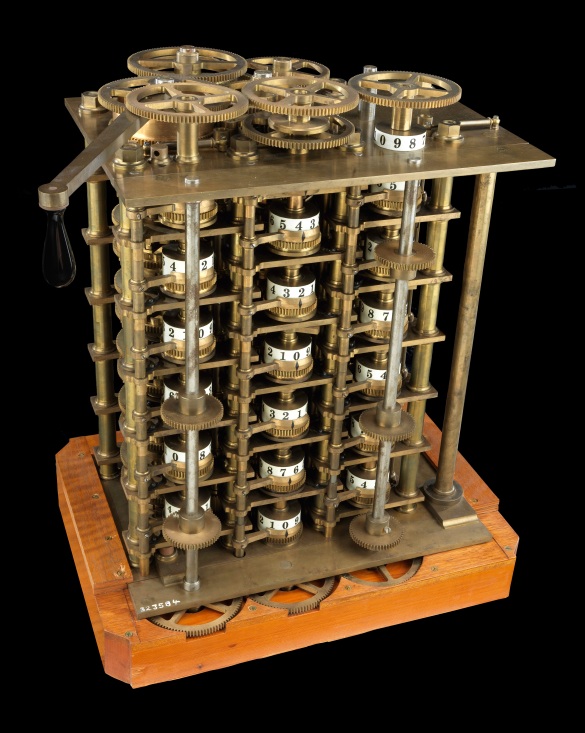 Clement was clearly not an easy man to work with but Babbage acted like Clement had no ownership over the work. Tradition had it that the tools a workman designed for a project were his own property and so could be used for other projects. Babbage disagreed, saying “My right to dispose, as I will, of such inventions cannot be contested; it is more sacred in its nature than any hereditary or acquired property, for they are the absolute creations of my own mind.” [4] In the end, independent arbiters ruled that Babbage should have the drawings but Clement could keep the tools he had built for the project.

Babbage moved on to work on his Analytical Engine, but he never got close to finishing this or any of his other big engineering projects. These repeated failures left the irascible genius a bitter man [5]. In contrast, Clement’s business went from strength to strength—his work on Difference Engine had enhanced his reputation. According to the Victorian industrial biographer Samuel Smiles, at the end of Clement’s life he returned to another childhood passion: music. He constructed an organ befitting the quality of all his work:“[it was] pronounced a very excellent instrument” [1].