The recent announcement of the 2nd annual Papin Awards for technicians makes now a good time to talk about Denis Papin, who he was and why it is so appropriate that his name is used for an awards series celebrating technicians.

Denis Papin, a Frenchman, entered British scientific history while fleeing religious persecution. He was a brilliant engineer, inventor, and technician who made major contributions to 17th century science, only for his name to be lost from the pages of the history books.

Denis Papin was born into a family of Huguenots in the Loire Valley in 1647 [1]. The Huguenots were a group of Protestants persecuted in 16th and 17th Century Catholic France. Although officially protected, Louis XIV took every opportunity to force Huguenots to convert to Catholicism.

By the age of six, Papin was living with his uncle and going to school in Saumur, a hundred miles from his parents’ home. It was a Protestant school where, on top of his normal classes, he learnt philosophy, logic, and the physical sciences. Papin’s particular love was for mathematics. however, after seeing famine hit the countryside when he was 15, his desire to help people overcame his passion and he followed his uncle and grandfather into medicine 2. After eight years spent studying at the University of Angers, he had a low opinion of both the teaching and of his fellow students but decided to finish his studies. Heading into his final exams, he encountered some difficulties. Although he was born into a noble family, he could not afford his medical exam fees and had to pay the debt off by working as a doctor in the local area 3.

Papin was desperate to get away from Angers. He had also come to realise that medicine was no substitute for mathematics and engineering. To follow his dream Papin moved to Paris, but in 1670 he was still working as a doctor. At a scholarly group, an early version of the French Academy of Sciences, Papin met the Dutch mathematician and scientist—and fellow Protestant—Christiaan Huygens. Huygens took Papin under his wing and, realising that Papin could not support himself financially, gave him a job as his assistant working on the newly invented air pump.

The air pump could be described as the 17th century equivalent of a synchrotron light source. Air pumps were at the cutting edge of science, but they were expensive and few in number. The experimental results they produced inspired great scientific controversy among western European scientists on diverse topics including pressure, respiration, and atomic theory. Papin’s four years working under Huygens’s guidance resulted in a book, ‘Nouvelles Expériences du Vuide’ (New Experiments about the Vacuum). It was published in 1674 under Papin’s name alongside five papers in the Royal Society’s journal describing their work together4.

Despite their success, their collaboration was short-lived, sparking a pattern of success followed by pain that would dictate Papin’s life. In 1675, Huygens was forced to return to The Hague due to illness and Papin leaves Paris for London. It is not exactly clear why Papin left Paris, but as a still-marginalised Huguenot he may well have struggled to find further work. With no income, he would have been forced to leave. He chose to travel to England, possibly drawn by the presence of Robert Boyle there.

Robert Boyle was the son of the 1st Earl of Cork and one of the richest men in the British Isles. He came to science late in life but rapidly became one of the biggest scientific names of the time. His was a practical, experimental, approach to science that suited Papin’s inventive skills. More importantly, Boyle had worked with his own air pump and had published the results of his experiments 5.

Arriving in London, clutching a very complimentary letter of introduction from Huygens, Papin needed a job. Initially, he took work as a tutor to make ends meet. Eventually, he made contact with Boyle and offered both his own services and the use of an improved air pump which he had invented while working with Huygens. It is at this point that Papin enters the history of British science, though he would fast disappear into the shadow of first Boyle, later Hooke, and then Newton.

From July 1676 to February 1679 Papin worked for Boyle, carrying out experiments in a variety of fields, though most significantly with the air pump. It was a difficult time in Boyle’s life as he was suffering from various illnesses including a long-term eye condition that made reading difficult and a painful stone 6. Papin was different to the other technicians working in Boyle’s laboratory; he was employed to work under Boyle’s guidance but Boyle’s illness meant that he had a lot of freedom.

This freedom might lead one to interpret Papin’s relationship with Boyle as one of colleagues, with Papin as an early version of the modern day post-doctoral researcher. However, the societal situation at the time meant that Papin’s status was that of servant, not a colleague 8. When their work together was published in 1674, it appeared under Boyle’s name alone 7. And although Papin is named as the experimentalist and inventor of some of the equipment, Boyle claimed that “I myself was always present… to observe whether all things were done according to my mind.” Given his health problems, this is doubtful.

Papin was portrayed as a technician, given some freedom to follow his own ideas but principally working under Boyle’s control. In fact, the only experiments Boyle does not take credit for—and is, in fact, slightly dismissive of—were those experiments concerning something Papin was passionate about: the “Preservation of Fruits, and of Flesh in Liquors” 7.

Somehow, the ever-inventive Papin seems to have found time alongside his work for Boyle to work on his own food-related invention. In 1679, Papin demonstrated the first pressure cooker at the Royal Society and published a book on the subject: “A New Digester or Engine for softening bones.” 9 It was an intensely practical book with detailed experiments and explanations of how to cook meat and fish. Although Papin’s immediate motive was, as he wrote to Huygens, “to relieve poverty, and to get wholesome and agreeable foods from things that we ordinarily reject as useless,” his digester was also a major advance in an area of science that was to become his greatest tragedy, the steam engine.

On leaving Boyle’s laboratory, Papin started work at the Royal Society as assistant to Robert Hooke. By this point Hooke was a famous natural philosopher and architect, but he was also massively overworked, still holding the position of Curator of Experiments at the Royal Society. The Curator was a technician role: constructing, and demonstrating experiments and equipment for society members. Unfortunately, Hooke was not known for his collegiality and Papin seems to have spent his time acting as a poorly paid secretary, being paid per letter written 2.

Despite these difficulties, Papin continued to impress with his experiments and in 1680 was elected fellow of the Royal Society. However, his signature never appeared on the Roll of Fellows as he had already left London for Venice, where he was working as director of experiments at the Accademia Publicca di Scienze. Typically, given Papin’s luck, this institution, which was meant to rival the Royal Society, lasted only a few years due to lack of funds. In 1684, he again found himself out of a job 2.

France was still no place for Huguenots under Louis XIV’s reign, so Papin found himself back in London, a refuge looking for work. He had built up a sufficiently good reputation that the Royal Society gave him Hooke’s old position as Curator of Experiments, but only on a temporary basis. He was paid the same £30 per annum as Hooke had been, but it was the wage of a craftsman 10 and one that Hooke had always complained about. Also, Hooke had contacts from his time in Oxford who could help top up this wage and promote him,11 while Papin did not. Despite this, Papin took every advantage of the position, wrote many papers and gave many demonstrations of experiments. Unfortunately, however hard he work, it is Hooke who is remembered for holding the prestigious position of Curator of Experiments and never Papin. Papin’s luck only went downhill from there.

In 1687, Papin moved to Germany under the patronage of the Landgrave of Hesse in Marburg, only for the Nine Years war to start making life in Europe very difficult. Papin’s father died and he was denied his wish to marry his cousin, although he later managed this 3. Despite it being an active time for Papin as an inventor, the results of his experiments were mixed. It was not that his inventions did not work, but they were not adopted or acknowledged. He invented a pump for ventilating mines, the “plunging boat” (an early submarine), and a grenade launcher. None of which he is remembered for. He lacked the financial clout and status to force the inventions into being widely adopted. The same problem hit the atmospheric steam engine, arguably his greatest invention.

Papin’s was the first practical design for a steam engine, but it was never built in more than model form. Worse, the Royal Society gave the patent for the steam engine to Thomas Savery, despite the inferiority of his design. This meant that Papin was almost entirely written out of history. He never saw any financial return from his invention 12.

Papin was forced to flee German after his employer turned against him. He returned to London in 1707, where he hoped to regain employment with the Royal Society. This did not go well; the Royal Society was struggling for money at that time and, even worse, it was now under the leadership of Sir Isaac Newton. Papin had been communicating closely, and publicly, with Newton’s nemesis Leibniz for many years on various scientific matters 13. Newton and Leibniz’s relationship was so antagonistic that anyone with any connection to Leibniz became a victim of Newton’s famous temper. Papin was thus frozen out.

Papin was stranded in London, a refugee from religious tensions in France and acrimony in Germany with no source of income. Boyle and Huygens were dead and repeated appeals to the Royal Society fell on deaf ears. Evidence suggests that Papin died in London in 1712, but there is no record of his death and no tomb 2. It appears that he died alone and desperately poor.

As a technician with Huygens, Boyle, and the Royal Society he excelled. Unfortunately, like so many technicians before, and since, he has been forgotten; indeed, was forgotten even before he died. We should remember Papin because his is the overlooked life of a technician. The Papin Awards recognise technicians who do great things, and it is right that we recognise them so that they do not become lost in the shadow of others. 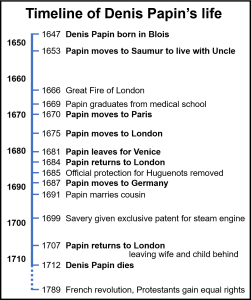 A big thank you to my wife, Rebecca Woods, for her help reading the works below written in French where no translation was available. Thank you for that, and for everything else.

7 R. Boyle, A Continuation of New Experiments Physico-Mechanicall Touching The Spring of the Air and its Effects, The Second Part, 1682.